Click on each title to reveal the song lyrics. each song below is written by bruce rupert and performed by various musicians and bands. be sure to check out our about us page to read more about bruce’s songs and why they were written.

Here I sit by the campfires glow
The cannons are silent, waiting in the fields
To start their volley in the morning light
Then I’ll witness the horrors that they ‘ll yield

If my name is called, and my souls set free
I’ll find my way to our mountain home
And I’ll walk beside you and you’ll know I’m near
And I never more will roam

Back Home to Galax - americana

If you’re reading this note that I’m leaving
Please tell my friends not to go
For all the gold that they’ll ever need
Can be found right down the road
And not.. so far… from home
My mama told me not to leave Grayson County
She felt I’d never return
She gave me some galax she picked from the mountains
Said “don’t forget where you come from
Don’t forget where you come from”
Those flowers have withered and died here in Detroit
Where nothin’ grows but steel and stone
I need to see those flowers back in Galax
New River carry me home
New River carry me home

Waiting For You - americana

Really thought those feelings had left me
It was all I could do to forget you
I moved on, my spirits were strong
I wouldn’t let your memory in
Then like the sea waves crashing
You came back with no warning
The storm had arrived, I needed to hide
But still, I let you come in

Don’t know how long you’ll stay here
And the reason you came back is unclear
I’ll go for the ride, and take this in stride
For you the door is always near
Then without warning you’ll leave me
And I’ll try again to forget you
I’ll return to my life without the drama and strife
Knowing you’re finally gone

One look in your eyes and the feelings are new
I’m biding my time, waiting for you

When Christmas Time Draws Near - Seasonal

Dance with the devil - Americana

I saw her at a dance hall on a sticky August night
The bayou waters were deadly still
There wasn’t a breeze in sight
I was standing by the bar alone
The ice dancing in my glass
When this woman in black came swirling by
She quickly caught my glance
With eyes darker then the sky outside
Long hair flowed about her face
The hall was full of women that night but she’s the only lady in the place
She moved across the dance floor like a panther in the woods
To be with her alone tonight, I’d do all that I could

I would dance with the Devil, upon the still waters
I’d make him a deal, I’d sign on the bottom line
I would rosin up his bow, I’d face Dante’s damned inferno
If I could be with her tonight
If I could hold her close tonight
The band stopped playing and the dancing stopped by the time I caught my breath
I looked around the room for her, but sadly found she left
I ran into the dark mist and I searched for her in vain
Only to know she would not return, I didn’t even know her name

That night I dreamed of a panther, stalking silently in the swamp
Then she turned into the woman in black and in a sweat my dreaming stopped
There outside my window, in a moonless summer night
Was the woman in black calling my name, I ran out in delight.

Slowly she held her hand out, as if asking me to dance
A fiddle started playing Jole Blon and I knew I was in her trance.
I held her tight all through the night as I stared deep into her eyes
Then I felt a tap on my shoulder and I turned around in surprise

Time to dance with the Devil, upon the still water
You made me a deal, you signed on the bottom line
Go rosin up my bow, now meet Dante’s damned inferno
Cause you were with her boy tonight
You were holding her tonight

Flowers and a song - Country

Too many nights I’m far away from you
Following my dreams I hope will come true
But dear don’t you worry, don’t ever you fear
The sweetest of my dreams is still holding you near

I’ll fill your life, with flowers and a song
We’ll walk hand in hand as the years roll along
With sunshine in the morning, at midnight in the rain
I’ll tell you I love you all over again

Who can tell us what tomorrow might bring
But the sun it’ll still shine, and those birds they’ll still sing
As Spring brings the tulips that rise through the snow
As constant as change is, my love for you grows

Frank and Magdalene lived in the Ridge Valley where the tall Rock Hills begin to climb
In a home her father built, of local field stone and wood, nestled among the ancient oak and pine.

A farmer all his life, his hands showed he paid the price, but a bitter word from Frank was never heard

But Magdalene she would cry, but not in front of her husbands eyes, for he gave her all a plowman could afford.

But Magdalene wanted more in life, then being a dirt farmers wife,
She stared out the window at the summer rain
And dreamed she was far from there, in New York with a millionaire Vacationing each summer in France and Spain.

Frank was not a man of words, and “I love you” was never heard. By Magdalene as she stood beside him all those years
And each day was the same for her, and the loneliness inside her tore
For the lack of love it brought a flood of tears.

And then when she could take no more
She heard her neighbor at the door
A look of panic on his face did show
For Frank working in the barn that day, lost his footing on wet hay
Sending him crashing to the stalls below.

Magdalene raced to his side and found Frank barely alive. The neighbor drove in town to seek a doctors care. She just cried in disbelief, she wanted love not grief As she cradled Frank and gently stroked his hair.

Before long the doctor arrived and together they carried Frank inside. Placing him gently on their feather bed. Frank was breathing but barely so, and with each hour her fears did grow
That the morning would find her husband dead

The sun rays through the window danced as Magdalene to her husband glanced
At Frank lying silent upon his bed
Then she saw with surprise her husband opening his eyes
As he tried in vain to slowly raise his head
Magdalene raced to Franks side, her tears she could no longer hide
As she laid her head gently upon his chest
And with words as soft as morning dew, Frank told her “I love you”
And all her fears were finally put to rest

So Far From Her - Americana

Ben wasn’t much more than a boy
When he joined his two brothers in fighting the Civil War
To help save the Union, the cause it was so clear
So he joined up with the Pennsylvania Volunteers
But his parents would worry every day without ease
And prayed to God each night to bring peace
And they followed the news after each campaign
For the names of boys never coming home again
For names of boys never coming home again.

The morning that the sad news came
A mocking bird flew in from an open window pane
And sang a sweet yet most sorrowful song
Then flew away before the crowing at dawn
Times have passed and Bucks County has changed
John and Henry would come home to their families once again
But Ben would not, he’s still so far away
Resting forever in Virginia clay
Finding his rest in an unmarked grave

The other day I went down to the Valley View
And knowing that I’d have more then a few
I left my truck at my cabin down the lane
And walked to the bar, and here I remain

I hadn’t been there but for an hour or two
When my friend Zeb into the bar he flew
Said “a great big bear’s on your road, he’s a nappin’
He’s sawin’ wood on the way to your cabin”

Well you know I’ve been drinking honey lager all night
One whiff of me and that bear he’ll want to fight
So I’ll just stay and kick up my shoes
‘Cause me against that bruin, the odds are.. I’d loose

So bartender why don’t you please call my wife
And tell her that I’m so scared for my life
Just tell her that bear he won’t let me by
So I’ll just stay here till he gets old and dies.

So here I remain, this dilemma I face
That bears kept me trapped in this place
No more chores, no more work, ‘cause I can’t leave here
Come to think of it.. I owe that bear a beer 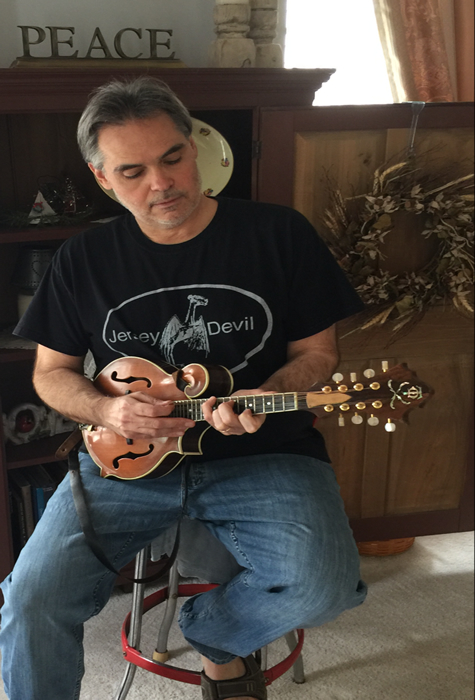 Growing up in Eastern Pennsylvania, Bruce comes from a musical family. His mother studied opera, and his father was an accomplished cornet player. His great grandfather, Tim’s grandfather, was a fiddler.

Tim’s mother and Bruce’s mother, although one year different in age , were aunt and niece, not unusual for rural families in that day, and grew up like sisters. They also sang together for family and friends, and sometimes only for the cow in the barn! Bruce and Tim are continuing this musical journey.

Bruce’s early musical influences include songwriters Bob Dylan, Harry Chapin, Gordon Lightfoot, Mickey Newbury, and later Robin and Linda Williams , Andy M Stewart and Tommy Thompson . He started writing songs while in High School, and remembers seeing Robin & Linda Williams the night of his High School graduation at Godfrey Daniels Coffeehouse in Bethlehem PA, and playing one of his original songs for them after the show! (Thank you Robin for letting me play your guitar!)

He learned to play clawhammer banjo from watching Tommy Thompson and mandolin from watching Jim Watson of the Red Clay Ramblers and then started playing in a couple “old timey” bands in his home town before joining “The Fresh Vegetables”, an acoustic band, based in Bethlehem PA.

Bruce has played in several other bands during the past 35 years, most recently with “The Beth Coleman Band”, “StoneHearth “, The Gray Wolves” and “Mountain Heritage.” He released “So Far From Her” an album of mostly original songs in 1999, and an album of all original material “Stories” with Mountain Heritage in 2020. His original songs recorded by other artists include “Flowers and a Song” recorded by Patti Davis & Bandit and “Back Home to Galax” recorded by Beth Coleman.

Bruce, a multi instrumentalist, enjoys many styles of “roots” music, from celtic and country to reggae, and incorporates these styles and sounds into his music, creating an eclectic blend that defies any specific category.
He makes his home in beautiful western New Jersey.