Click on each title to reveal the song lyrics. each song below is written by Tim scheetz and performed by various musicians.

Bring Back the Trains - Americana

The Ballad of Sam and Katie - Up Tempo

He's Reaching For You - Gospel

He Didn't Come Back Alone - Americana

After the Storm - Gospel 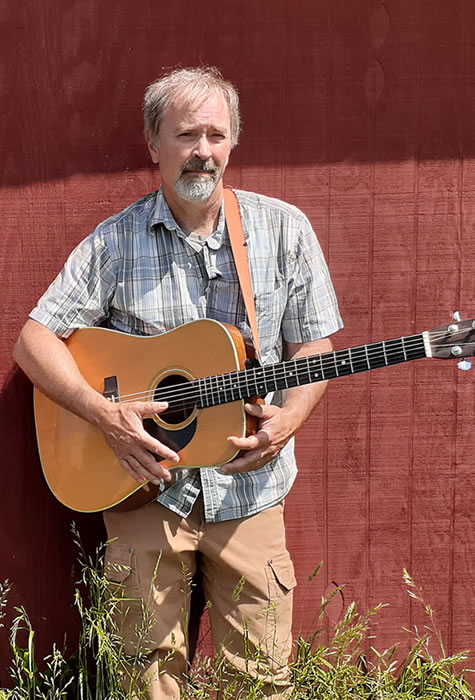 It was on the 5th of May 1969 that an 8-year-old boy received a Cameo acoustic guitar for his birthday. Folk music had been played in Tim’s home since the early ‘60’s because his mother liked listening to ‘Peter, Paul and Mary’ and ‘The Kingston Trio’. Sprinkle in a dash of Roger Miller and Glen Campbell for country; Al Hirt and Boots Randolph for jazz; and TV variety shows featuring Johnny Cash, Glen Campbell and The Smothers Brothers needless to say, Tim was fascinated by music-ALL music.

Oh, and there were cases of 78rpm’s in the basement! Harry James, Glen Miller, Les Brown, Tommy and Jimmy Dorsey! Whether played on Mom’s RCA record player or Grammy’s old Victrola the Big Band sound was wonderful. This gave Tim a love for big bands that would, at age 12, cause him to take up the Alto sax which would be his primary instrument through his teenage years but he still played guitar in youth bands and in church.

Tim learned to sing harmony in church and via his mother, who sang alto. She taught him how to sing above and below the melody of a song. Tim’s mother and sister were his main singing influences in his early years.

Around the age of 10, Tim received a Bell and Howell cassette tape recorder. This little machine started his fascination with recording. He would place the microphone next to the TV speaker and record NASA space launches, musical and comedy shows, and pretty much anything. Tim’s cousins Clarke and Bruce Rupert also shared this love for recording. Remember the 78’s in the basement? The boys
came across additional recordings that would eventually shape their psyche… ‘Spike Jones’ and ‘Homer and Jethro’.

There was a period in the early 70’s when you could hear novelty recordings where the boys would be interviewing imaginary people and their responses would be snippets of popular recordings of the day. Tim and his cousins spent countless hours making recordings in this fashion. Even writing their own funny commercials!

Toward the end of high school and into college Tim was into Rhythm & Blues. He played sax along with his high school jazz band friends, in a band called ‘The Great Saturday-Nite Swindle’ at various venues and night clubs.

Over time, Tim gravitated more towards the guitar as his instrument of choice. Introduced to bluegrass music in the late 70’s and 80’s, he listened more and more to acoustic music. He saw acts like The Bluegrass Cardinals, The Lewis Family, and The Easter Brothers, and kept in touch with his cousin Bruce who began singing and playing in groups like ‘The Fresh Vegetables’ and ‘The Pleasant Valley Boys’.

In the mid 90’s he joined the group ‘Willow Creek’, where Bruce was already a member. Later on he also joined ‘Richland Station’ with Bruce. In 2001, Bruce, Tim, and Bill Kunsman formed ‘Mountain Heritage’ which continues to this day with current members Bruce, Tim, Mike Terris, Matt Koch, and Marty Smith. From 2004 to 2014 Tim was a member of ‘The Beth Coleman Band’. Currently he also performs with ‘The Stonehearth Bluegrass Band’ and with ‘The Gray Wolves’.

In addition to playing music, Tim writes and records in his studio in Haycock Township, PA with his cousin Bruce Rupert. Together they have written and recorded numerous songs performed live, played on radio programs, and uploaded to the internet.